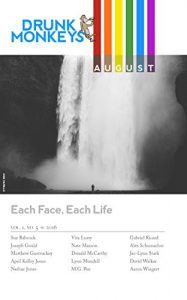 Drunk Monkeys was a literary magazine founded by Matthew Guerrero (also known as Matthew Guerruckey). Its Kindle edition is still available on Amazon.com and Amazon.co.uk.

Drunk Monkeys are also a subject of many “funny” movies on YouTube like this one about vervet monkeys from St. Kitts (see the video below).

It’s been about 300 years since the vervet monkeys were introduced from West Africa to the island of St. Kitts. Some of the monkeys escaped and they acquired a preference and taste for alcohol when they eating fermented sugar cane that the workers had left behind in the fields. These days, velvet monkeys raid local restaurants and bars to lessen their thirst and satisfy their cravings.

BBC reported also about Lemurs get high. Lemurs use millipedes as an insecticide and become intoxicated in the process.

The millipedes are emitting a specific toxin that the tiny primates use for rubbing it onto their fur as a highly effective insect repellent. But the toxin also makes the lemurs secrete saliva and will get them high, very high!

Lemurs are small primates that are, on some Malagasy islands, hailed as sacred. They are vital pollinators that feed mainly in the dark on nectar produced by night-flowering trees.

It looks like this gives them more opportunity for daytime fun as they go out looking for the huge millipedes that are filled with a lethal cocktail of secretions, including cyanide.

Animatronic spy creatures discover that mischief is rife in nature, but there are still rules that govern the animals’ lives.

The “Drunken Monkey” idea comes from that alcohol (primarily ethanol) is consumed routinely by animals that eat nectar and fruits. In the 19th century, Louis Pasteur explained the natural process of fermentation and that it is a common natural process that comes from the metabolic influence of yeasts on sugar.

The sugar molecules are producing alcohol to extinguish bacterial competitors and it accumulates at rather low concentrations within nectar and fruits. It also produces a vapor trail in the environment that indicates the presence of sugars and fruits that animals can sense and smell. They follow this odor to reach the source and the sugars in the fruit.

Drunk as a Monkey Synonyms

The expression “Drunk as a Monkey” means somebody is intoxicated with alcohol to such an extent that he (or she) has lost control over the body’s normal functions, both physically and mentally. You won’t find all these expressions in ASL (American Sign Language) where just a few options are listed, but in spoken and written English, there are many synonyms. So let’s take a look at synonyms of “Drunk as a Monkey”, both as an adjective and as a noun:

Then, there’s also the expression: “Have you got a Drunken Monkey mind? This is meaning that your mind is quite resistant to being quiet. When you sit still, it seems like your mind is doing all it can to distract you. You may feel like your mind is driving you crazy and that you can’t relax.